A start-up from Montreal, Taiga Motors, has been actively trying to create all-electric snowmobiles for the past few years. Now, the company has unveiled its new electric boat called “Taiga Orca” with a 23 kWh battery pack. Outwardly, the company’s new product is very similar to the Jet Ski, and it immediately catches the eye.

The new Taiga Orca is equipped with a 23 kWh battery, which is more than enough for an electric vehicle of this size. According to the company, this electric Jet Ski-like watercraft can work for two hours from a full charge of the battery. The maximum speed of Orca is 104km/h (65mph) and can generate an output power of 134kW (180hp). 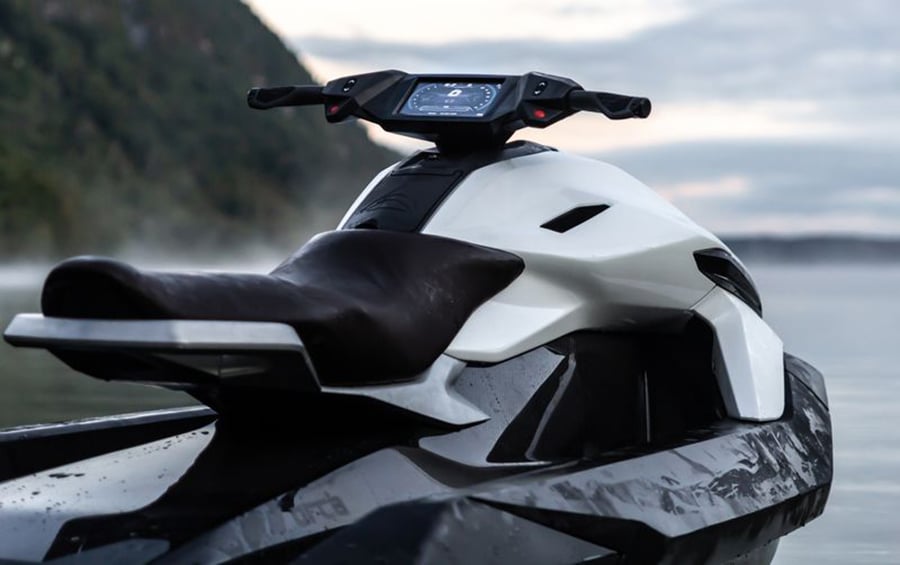 Orca can be recharged from a conventional outlet, or from a fast DC charger, with which the Jet Ski will be charged from 0 to 80 percent in just 20 minutes, which is an extremely commendable result.

This 9.5 ft (2.9 m) long and 3.9 ft (1.2 m) wide electric Jet Ski weighs around 580 lb (263 kg) thanks to full carbon construction. Besides, the entire design of the electric watercraft is winter-resistant. Also, there is a waterproof digital display with which you can use Bluetooth, LTE, Wi-Fi, and GPS during the trip. This display will also provide you with the most accurate and detailed information about water temperature, access to cameras, and even sonar.

However, for all this, you will have to pay quite a small amount – $ 24,000 for the regular version and $ 28,000 for a special edition. The company says that it is building only 500 of them and the first 100 will be special edition models. The production and sale of the Taiga Orca are scheduled for 2020.

Although the Taiga Orca is expensive, it can help save a lot of money on fuel. In addition, electric boats can also be used when fuel boats are not permitted.

The jet took off for a three hour, 51 minute flight over Washington state before landing.
Read more

Manta5 Hydrofoiler XE-1, an electric bike to ride on the water

With its incredible electric pedal assist, you can really pedal on the surface of the water.
Read more

This will explore how the Waymo Driver might be able to create new transportation solutions.
Read more

Falco Xplorer can fly continuously for more than 24 hours, with a payload of 350 kg.
Read more

New iMac may take the form of a capital letter "J."
Read more

Manta5 Hydrofoiler XE-1, an electric bike to ride on the water

With its incredible electric pedal assist, you can really pedal on the surface of the water.
Read more

From now, the satellites will reply to these messages, assuring people in danger that help is on the way.
Read more

Trojan Horse: A nanoparticle that eats away plaques that cause heart attacks