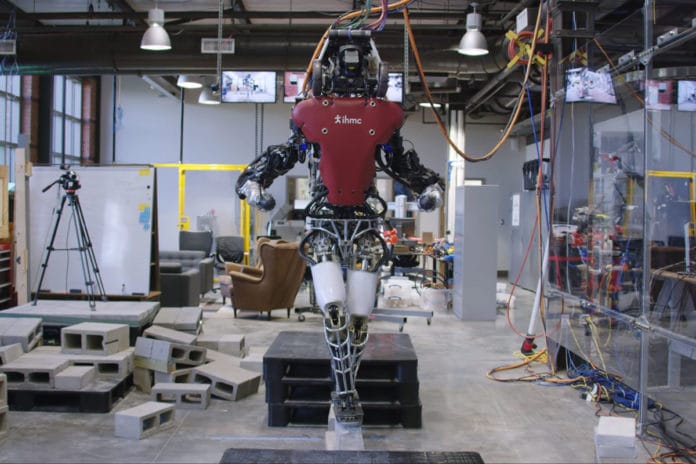 It is far more difficult to replicate the abilities of a human body to navigate various difficult obstacle in a machine or, especially the one that operates autonomously. The human body does this using its complex joints and natural system for creating the balance. So, how a robot or humanoid can do everything that a human being can do?

But kudos to the researchers from the Institute for Human & Machine Cognition (IHMC Robotics) in Pensacola, Florida for having that sense of humor. They recently released a video this month where they showed their efforts to train a bulky, 165-pound (around 75 kg) humanoid robot to walk across narrow terrain using autonomous planning.

In the video a humanoid robot- a Boston Dynamics-built Atlas model carefully and autonomously walking across the various objects like wooden planks and cinder blocks.

Boston Dynamics’ robots always surprise us with their capabilities. It hasn’t been so long when the Boston Dynamics released their SpotMini Bot performance video– where the robot dogs were pulling a large box van. And again a new video that will blow your mind will its robot’s extraordinary skills.

Boston Dynamics has created Atlas, but IHMC Robotics has written its algorithm. In the description with the posted video, the team wrote, “The robot senses the terrain with lidar and builds a map of planar regions. A path planning algorithm plans footsteps across the planar regions to a goal location, specified by an operator.”

It is also mentioned there that their robot is “about 50% successful over this type of terrain.” And the company is planning to increase the rate of success by adding balance using angular momentum and by “better considering joint ranges of motion.”

Atlas, the worlds’ most dynamic humanoid is about 1.5 m tall and has a total of 28 joints to achieve mobile manipulation. It weighs 75 kg and is able to carry up to 11 kg load.

The robot has created her self-portraits by looking into a mirror using her cameras on her eyes.
Read more

It can perform many human gestures, such as shaking hands.
Read more

It could increase production efficiency by up to 30% with improved working conditions.
Read more

Franzi, a talkative robot that cleans and cheers up patients at a German hospital

A German hospital supplements staff shortages with a robot that cleans wards, spread cheer to patients and staff.
Read more

According to the company, the robots will save money and reduce food waste.
Read more

Panasonic introduces a companion bot Nicobo that can fart

The robot can speak, recognize the owner and respond to touch.
Read more