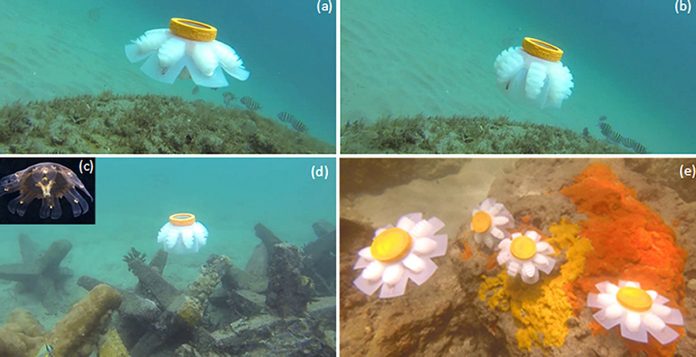 It is not hidden how seriously global warming is impacting all living entity. With every passing day, the temperature is rising on earth and in oceans. Global warming has not merely been damaging existence on the earth but also in the ocean. It has damaged coral reefs beyond repair. The worsening condition of the world’s coral reefs shows how profoundly they need some concern.

Beyond the odds coming, while studying these coral reefs, researchers from the US Office of Naval Research and Florida Atlantic University has discovered the soft-bodied robotic jellyfish.

Initially, the problem with research deep down in the ocean was the fragility of coral reefs. It was extremely risky to monitor the health of the reef ecosystem and reef habitats using human divers and bulky equipment. But this new soft robot jellyfish is anticipated as the solution.

During the research, scientists used the moon jellyfish as inspiration. They built prototypes to test the feasibility, if hydraulic movement system is utilized to permit their creation to wander in the water with reduced effort.

“Additionally, live jellyfish have neutral buoyancy. To mimic this, we used water to inflate the hydraulic network actuators while swimming.”

The soft exterior of the robot, which is made of a rubbery silicon material, allows it to squeeze through tiny gaps. Engeberg added, a future iteration of the robot could even incorporate a sonar sensor to gauge the size of openings before muscling through them.

It could turn out to be the boon in the study of coral reefs without risking a life of the reef habitats. Many advances are expected in this robotic jellyfish in future to keep-eyes-in-the-sea.  It will not merely help to capture those rare pictures but will reduce damage happens during monitoring it through bulky equipment.

The creation of such a device does not take much time and does not require high costs.
Read more

It takes about 15 minutes to destroy 99.99% pathogens, bacteria, and viruses in a typical hospital room.
Read more

It is a way to tie in robotics with everything else that’s going on and help kids learn robotics.
Read more

The drones should cover various fields of application, beyond the health sector.
Read more

It can be radio controlled to 500 m range and is usable under most sea conditions.
Read more

When fired two fire extinguishing bombs at the same time, it can extinguish 100 cubic meters of fire.
Read more