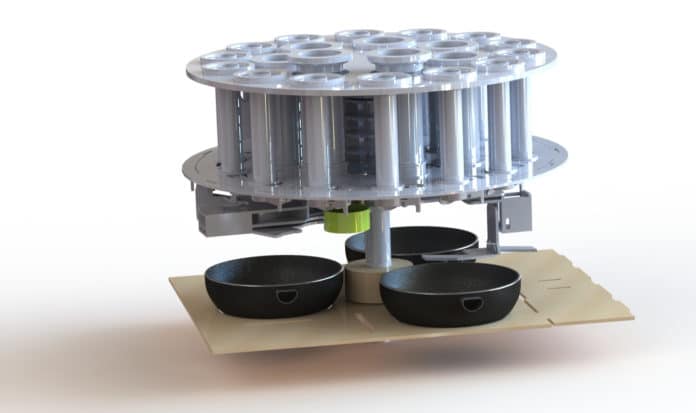 Have you ever wished you had a robot in the kitchen that prepares a meal automatically when you come back from work?

With this in mind, a Bangalore-based startup Mechanical Chef has created a compact cooking robot that can prepare a meal automatically. The startup was founded in 2017 by Cohan Sujay Carlos, a former machine learning researcher at Microsoft, and Co-founder Arpit Sharma, an aerospace engineer who worked on the moon rover at Team Indus.

The intelligent “Mechanical Chef” can cook several Indian cuisines with a minimum of human intervention. The most exciting thing of all is that it can be installed in any traditional kitchen.

It is a wooden model that has a rotating drum with several canisters for loading chopped vegetables, spices, etc., and a tank for water and oil. All you have to do is cut the vegetables and other ingredients and drop them in the pan over an induction plate. The induction plate is placed just below the rotating drum, which also has a stirring arm for cooking. The machine then takes over and does everything else to present a delicious meal for you.

The Mechanical Chef can cook more than 100 Indian dishes like biryani, paneer butter masala, kadhai paneer, and many more. Using an additional application, you can remotely control the robot from anywhere. Just select what you want to cook, press “Start” and it starts cooking even when you are not there.

Of course, Mechanical Chef is not the first automatic cooking device. The UK-based company Moley Robotics has designed a Robotic Kitchen, with robotic arms, that prepares all kinds of tasty recipes, and also cleans the dishes and the kitchen. However, it costs thousands of dollars, which is not affordable for everyone.

To keep the cost minimum, Mr. Sharma and Mr. Sujay create a machine that requires less moving parts. For this, all its processes would have to work with the force of gravity, not against it. And that’s a challenge. It took another try and some experiments with the dispenser before they came up with a final design.

The cost of the Mechanical Chef is around 40,000 INR, which may reduce to 30,000-25,000 in the future. The company has also developed the second prototype of the robot, named Mechanical Chef 2.0, which has a sliding part for lesser power consumption. Also, most of its components are removable and detachable, which makes cleaning easier.

Currently, the robot is under trials, and a production version might take some more time to hit the market.

Rolls-Royce reveals micro-reactor that could send humans to mars

Rolls-Royce reveals micro-reactor that could send humans to mars