By Ashwini Sakharkar
May 4, 2019
Robotics

Many companies are trying to revolutionize farming using robotics and AI. Iron Ox opened its first autonomous robot farm in October, where robots would tackle many of the tasks that are traditionally handled by humans. And now the robot farming startup has taken its first step to prove there’s a market for what they’re growing.

The team has recently announced that its leafy greens are available to purchase in a single location in California. The company is selling three types of greens at the San Carlos branch of Bianchini’s Market.

It is supplying Genovese basil, red-veined sorrel and baby head lettuce- a selection of greens that Bianchini’s owner Kevin Bianchini believed would be popular with his customers. 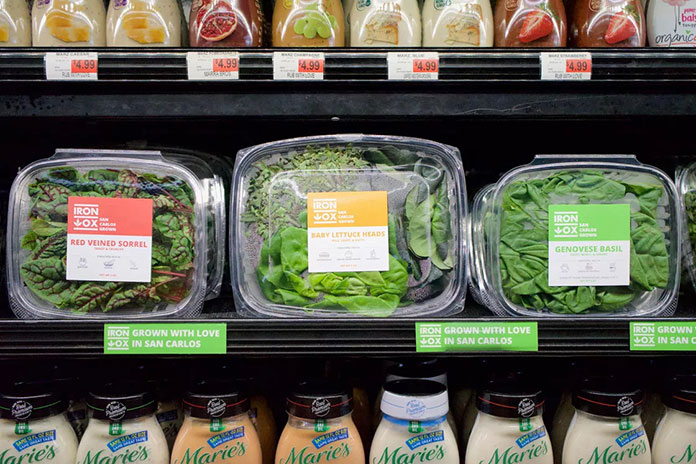 Iron Ox is now selling three types of greens/ Image: Iron OxThe company Iron Ox uses the combination of robotic picking arms, hydroponic vats, and self-driving porters to grow vegetables. It was claimed that its farming is ‘autonomous’, but still humans are needed for a lot of the work like planting seeds and packing plants when they are ready to eat.

Although, the news of the company started selling its products is promising. The company supplies the family-owned grocery store with five to 10 cases from its robot farm each week, and the product consistently sells out.

“We have the technology, robotics and (artificial intelligence) helping grow the produce, but what’s really resonating is the product itself,” said Iron Ox CEO and co-founder Brandon Alexander according to the story published in the San Francisco Chronicle. “It’s the fragrance of the basil, the color profile, the freshness.”

“We’re making it more and more prominent that we’re grown here in San Carlos,” Alexander added. “I think that allows us to get a specificity that a lot of others just can’t do — it’s not just somewhere in California.”

Still, it’s just the start for Iron Ox and the new wave of automated farming startups. And if the market they’re trying to create starts to grow, who knows what fruit it will bear.

The creation of such a device does not take much time and does not require high costs.
Read more

It takes about 15 minutes to destroy 99.99% pathogens, bacteria, and viruses in a typical hospital room.
Read more

It is a way to tie in robotics with everything else that’s going on and help kids learn robotics.
Read more

The drones should cover various fields of application, beyond the health sector.
Read more

It can be radio controlled to 500 m range and is usable under most sea conditions.
Read more

When fired two fire extinguishing bombs at the same time, it can extinguish 100 cubic meters of fire.
Read more

Vyrus Alyen comes with a composite body and Ducati engine

With the latest model, the manufacturer based in Rimini has, once again, left us with our mouths open.
Read more