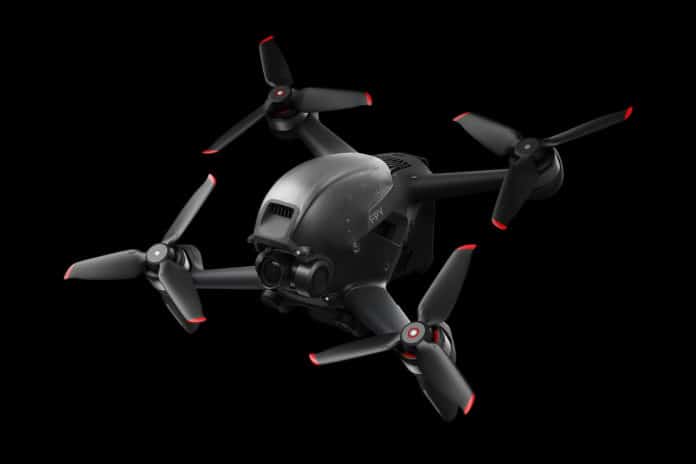 DJI, best known to the general public for its Mavic range made up of cameras intended for shooting, has decided to enter a completely new segment for them: that of FPV drones. It is a machine inspired by racing drones, known as racers, but supposed to carry several in-house technologies developed for the brand’s previous drones.

The DJI FPV drone offers HD Low-Latency Transmission of video that gives you the ability to view high-definition footage from the drone in stunning real-time. Also, its set of hardware controllers allow all sorts of users to experience the FPV’s glorious adrenaline rush, whether you’re a novice or a pro-drone-flyer.

Its uniquely curved and aerodynamic design is engineered for minimal drag. Also, it houses all of the drone’s modular, removable, and replaceable parts, including the battery, camera, gimbal, landing gear, and top shell. The drone is slightly heavier than most FPV drones due to its hefty battery, which enables 20-minute flight times. The manufacturer also ensures that the DJI FPV remains easily repairable thanks to its modular design.

The DJI FPV is designed to be immediately ready to fly, without the need for special knowledge or even settings. The device is supplied with its own remote control with a design reminiscent of a gamepad and the latest version of the DJI FPV goggles. The FPV can film 4K at 60fps, instead of the 24fps on the Mini 2, at up to 120 Mbps video, capturing crisp details that make the footage look as exhilarating as the flight. Photos are only supported in JPEG format, but this is a sports drone, so the image quality and advanced shooting capabilities in difficult conditions are secondary.

The mechanical gimbal works only on one tilt axis, but due to the ultra-wide 150° viewing angle, distortion correction, and the advanced electronic RockSteady stabilizer, smooth footage is achieved even with sharp turns. Its top speed in M mode can reach an impressive 140 km/h. At the same time, the device is capable of accelerating to 100 km/h in just 2 seconds under ideal conditions.

DJI has also designed an emergency braking system to avoid tragedies with speeds and keep the drone in a stationary position, activated by simply pressing a button. Besides, the drone is equipped with multiple sensors, which allow it to dodge obstacles, while smart RTH features ensure the drone makes its way back home when it’s low on battery.

The DJI FPV is already available for $1,299 on DJI’s retail website, with an additional $199 for the Motion Controller.